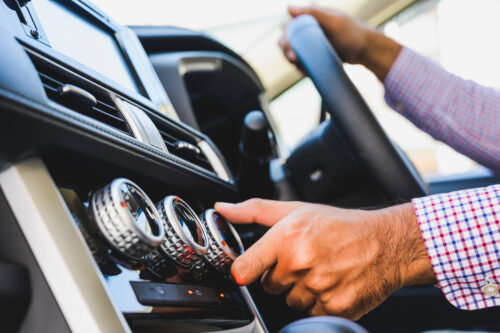 Air conditioning is the process in which air inside the passenger compartment is cooled, dried, and circulated. Heat transfers from inside to outside the vehicle.

– A liquid must take in heat to become a gas

-A vapor must liberate heat to convert to a liquid

When moisture from steam condenses on the cool bathroom mirror, a vapor changes to a liquid. This process is called condensation. As vapor condenses, it releases heat. When steam condenses back to water, it releases this heat. Cooling means taking away heat. During evaporation, heat is absorbed. In our example, evaporating water absorbs heat; your car’s AC refrigerant absorbs heat when it evaporates.

When the compressor repressurizes refrigerant, heat is released to the ambient air at the condenser.

One of the air conditioning systems’ functions includes dehumidifying the air inside the car. Heat is lost when hot, humid air circulates across the evaporator. Moisture in the air condenses on the evaporator fins like on a glass of ice water. A fan blows the cooled, dehumidified air into the passenger compartment.

Your vehicle’s AC unit will not work as it should if the evaporator, condenser, or compressor malfunctions. If your AC blows warm air, bring it in for a checkup. We will quickly ensure these three essential parts of your A/C unit work as they should and recommend a plan to have you on the road in cool comfort.